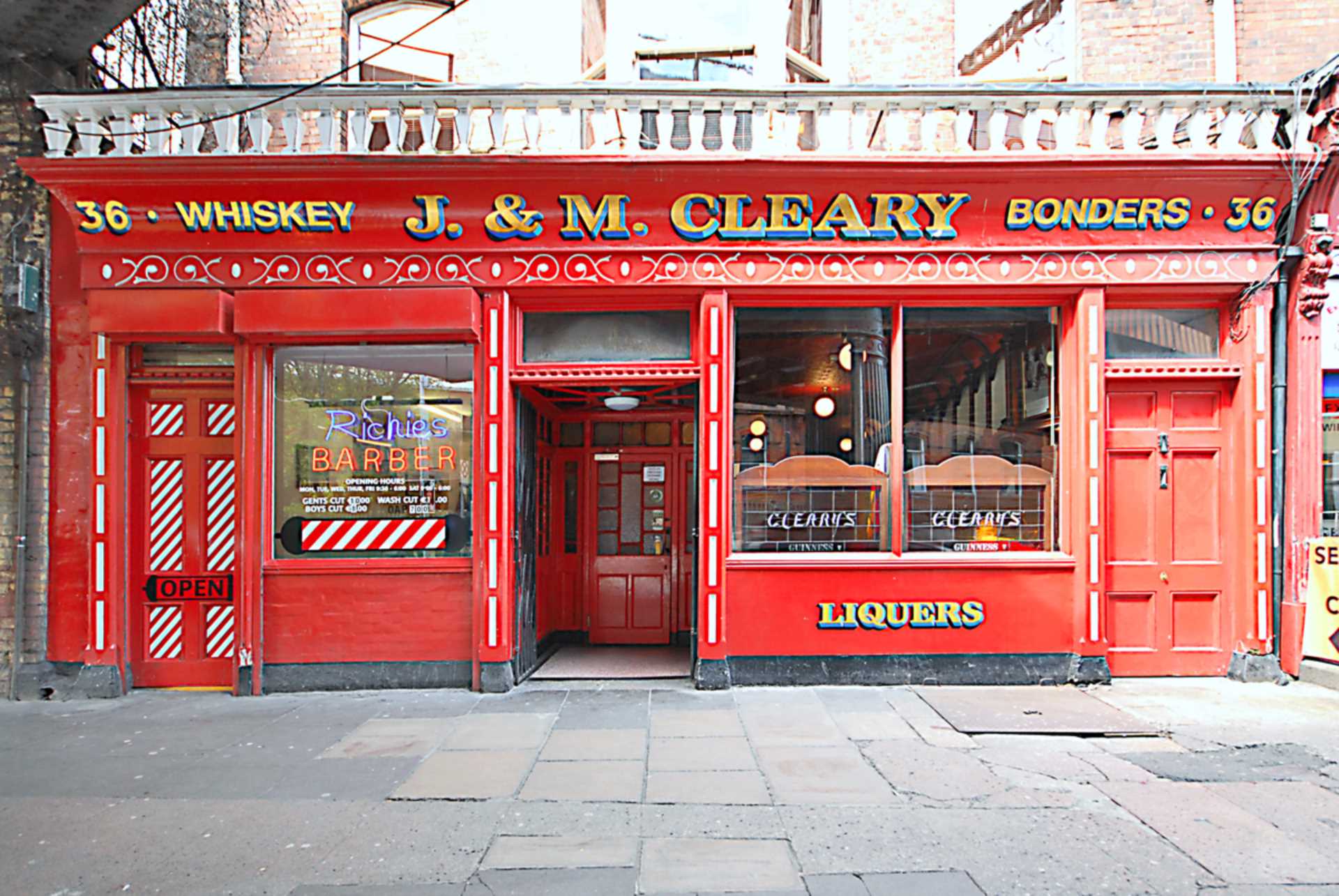 Follow me up to Monto!. And that is what developers are doing in their droves with large scale developments started at Connolly Station and more on the streets surrounding the Station including plans for the largest Hotel in Ireland on Amiens Street - the area is attracting new retailers and investors.

With the decision by much loved landlord Dessie Hanlon to retire from "Behind the Stick" Coldwell Banker Commercial with joint agent, John Younge Auctioneers, offers a wonderful retailing and investment opportunity with the sale of J & M Cleary's Pub, on Amiens Sreet with its adjoining lounge,/ function room , 2 large overhead 2 bedroom apartments and adjacent retail unit.

One of Dublin's oldest pubs it is a listed building with a rich history. Michael Collins held meetings there during the 1918-21 War of Independence and frequently slept in one of the overhead apartments.Images of Michael Collins and other Irish heroes from the time still adorn the walls.

History of J& M Cleary's Pub
J & M Cleary was built in the late 1800's. Its intended use was as a boarding house for the workers from Great Drogheda and Northern Railways building Connolly Station. The station took 14 years to build. In 1846, the building became a public house and it was first named 'The Signal House'. While known under this name, The Signal House was mentioned in James Joyce's 'Ulysses'. The surrounding areas of Talbot Street and Amiens Street were known to be rough and used as a red-light district, which is clearly known in Ulysses as 'Monto'.

It was then leased to a merchant called Hennessy, but then went on to be leased to the Cleary family. The Cleary's did not have to pay for electricity costs as the railway bridge that was built was blocking the natural sunlight. The Cleary family ran the business for more than 90 years. Jim Cleary the original owner, was great friends with Michael Collins and Harry Boland, leaders of the Easter Rising. Both Cleary and Boland played hurling for Faugh's hurling team. Jim Cleary also represented Dublin and achieved two All-Ireland medals and 4 Leinster medals for hurling. Collins was a frequent visitor to the pub along with Boland. This led to them holding numerous meetings there in relation to the 1916 Rising and the Irish War of Independence. They also received a lot of information from the rail and dock workers while drinking in the pub, about the comings and goings of British soldiers. The 1996 film 'Michael Collins' starring Liam Neeson as Collins and many other well-known actors such as Alan Rickman, Julia Roberts, Aidan Quinn, Stephen Rea and Brendan Gleeson featured scenes which were filmed in Cleary's. Another well-known Irish film 'The Commitments' (1991), based on the book by Roddy Doyle, was filmed there also. The film 'Term of Trial' starring Laurence Olivier was also shot in Cleary's. The 2010 documentary 'Ireland's Greatest' narrated by Michael McDowell, was briefly filmed here in which the current owner and a local historian gave information on Collins and the pubs use over time. The bar has a preservation order befitting one of the Northsides oldest pubs and historical importance.

The details & particulars contained within this brochure, are for guidance only and do not form part of any contract or intent to
contract. While every care has been taken in the preparation we do not hold ourselves responsible for any inaccuracies. They are issued on
the understanding that all negotiations will be conducted through this firm. Please note we have not tested any apparatus, fixtures, fittings, or
services. Interested parties must undertake their own investigation into the working order of these items. All measurements are
approximate and photographs provided for guidance only.We shall have no liability for any errors in the measurements and interested parties
should conduct their own survey.

Note:
Please note we have not tested any apparatus, fixtures, fittings, or services. Interested parties must undertake their own investigation into the working order of these items. All measurements are approximate and photographs provided for guidance only.